It’s no question that Santorini is one of the most stunning places on Earth, but word has gotten out to the masses. This year, nearly two million travelers will cross off Santorini from their bucket list and if you haven’t noticed from Instagram, Santorini was THE place to be in Summer 2017. So much so that Santorini’s mayor is now capping visitor numbers this year.

But there are other unspoiled Greek Islands that you can have (almost) to yourself, and with temperatures in the 70s past October, there is no better time to extend summer with a trip to Greece.

Zakynthos is a verdant island endowed with fertile valleys and a temperate climate. Its landscape diversity has resulted in different types of beaches: there are sandy beaches in secluded coves where the tranquil waters are deep blue on the island’s southeastern part; yet, if rugged cliffs and an interesting underwater world are to your liking, try the western part of the island. On Zante, great care is taken to protect two endangered animal species, namely the caretta aretta sea turtle and the monachus monachus seal. The city of Zakynthos is the capital of the island and at the same time the island’s port.

Take a tour around the city and visit:

– The Solomos Square surrounded by buildings with characteristic traditional architectural features of the island, arch-shaped windows and arcades. The bust of D. Solomos national poet of Greece dominates in the centre. Here you can also find the Public Library (with 55.000 volumes), the Post-Byzantine Museum of Zante exhibiting treasures such as statues trimmed with gold, icons and art woodcuts.

– The Post- Byzantine Museum of Zante in Solomos square, exhibits treasures such as statues trimmed with gold, icons and art woodcuts.

– The coastal road known as Strata Marina (K. Lomvardou street), which is one of the most frequented part of the city, with cafes, bars and restaurants, from the Solomos Square up to the church of the patron-saint Aghios Dionysios.

– The Aghios Markos square. Here, in 1797, the revolutionaries (popolaroi) burnt the Libro d’ Oro and planted the tree of freedom. This paved square is the main meeting point for locals and visitors. Here, you will find the Museum of Solomos, Kalvos and Eminent Zakynthians which also hosts the bust of the Greek national poet, created by Georgios Broutos in 1902.

– Rouga: Its name is Alexandros Romas street, starting at Aghios Markos Square crossing almost the whole town. This street with the impressive arcades has been the main commercial center of the city for centuries.

– The Venetian Castle situated on a hill overhanging the town in the place of the old acropolis named Psofis. 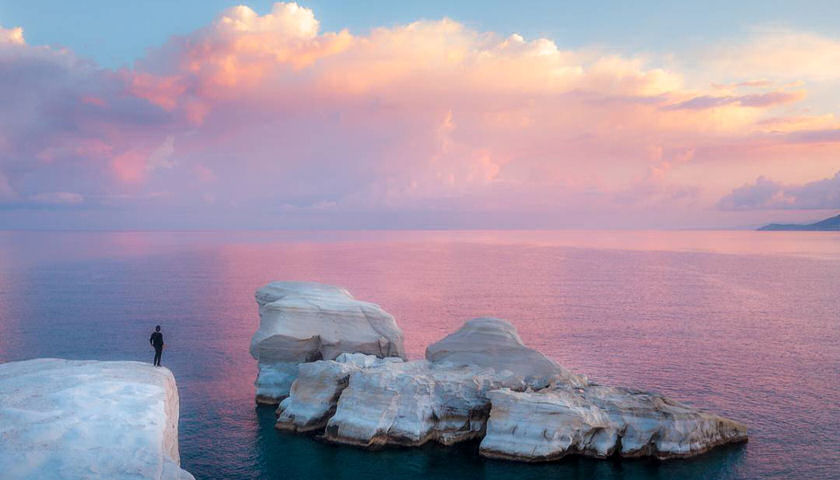 The volcanic activity in ancient years has endowed Milos island with an exciting variety of gorgeous landscapes, consequently offering the visitor a wide range of activities. The funny shapes of the rocks and their wonderful colours at the beautiful white sandy beaches are one expression of the volcanic features of Mílos; the economic activity is another: minerals such as obsidian are excavated here. What is more, one of the most ancient mines in the Mediterranean is on this island.

References had been made by Hippocrates to the peculiar morphology of spectacular caves (Papáfragkas and Sykiá) and a multitude of thermal springs (Kanáva, Alykí, Provatá, Pikropiyí).The diving enthusiasts will find a paradise in the underwater caves in the triangle formed by Mílos, Kimolos and Polýegos islands.

Why: enjoy 80 amazing beaches; among them stands out Kléftiko with its turquoise waters and Sarakíniko with white sharp rocks cutting deep into a sheer cliff; add the unique lunar landscapes, the rocky secluded caves, the mysterious catacombs, the “sleeping” volcanoes and a picturesque Cycladic Chóra.

Must visit: As many beaches as you can! The white rocky landscape that embraces Sarakíniko forms an once-in-a-lifetime encountered lunar landscape while on Kléftiko, which can be reached only by boat, you can dive in secluded rocky caves with crystal clear waters. Add the wild beauty of Alogomántra, the open cave of Papáfragkas, the sheltered Ahivadolímni- the biggest beach on the island where also the island’s camping site is situated- and the beaches of Fyripláka, Yérakas and Tsigrádos adorned with grayish-red rocks.

Accommodation: On the island you will mostly find family-run guesthouses; the big and luxurious five-star hotels have only established their presence over the last years. You can also choose to stay in one of the traditional colourful houses by the sea, the so-called “sýrmata”, mostly found on the settlements of Klýma, Madrákia, Mýtakas and Fyropótamos.

Wander around the castle district at dusk when the sun washes Chóra with its warm golden light… The Castle’s top, the benches on the courtyard of Panayiá Korfiátissa church or Panayiá Thalassýtra are all ideal spots to enjoy this breathtaking scenery that will certainly weave a powerful spell on you… How about private dives on secluded beaches and well-hidden rocky caves? Rent a boat from Adamantas Port and you will find yourself on beaches that you have never thought of putting foot on in your life! 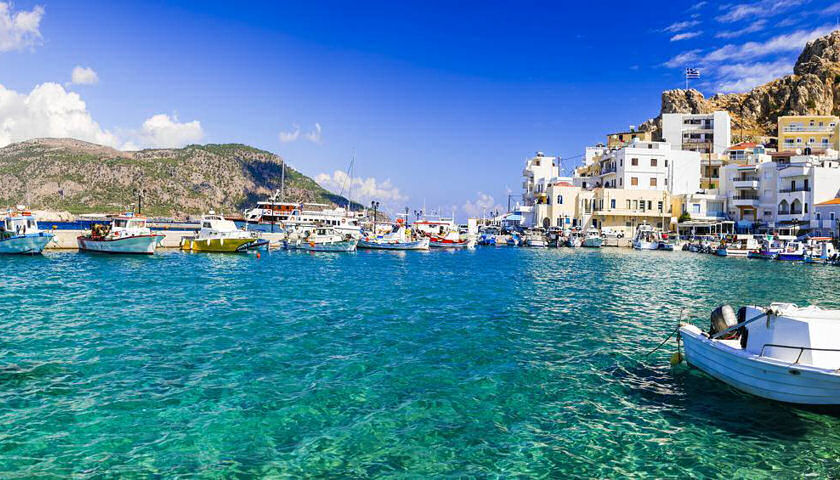 Pigadia is the capital and main port of the island, where you’ll come across significant monuments. At the entrance of the port you’ll notice the the “Vouno” Hill where you can see the ruins of an Acropolis at an altitude of 23m. On your left, you’ll see a building with an impressive architecture dating back to the Venetian Rule. It used to house the district officer but today it is used as an information center for the mediterranean monk seal as well as a museum with exhibits from various periods of the island. Make sure to stop by Afoti where you can admire the ruins of the paleochristian Basilica of Agia Foteini and Myloi where Poseidon’s cave awaits you.

Beaches that suit all tastes
Crowded or secluded, sandy or pebbly, with or without facilities… the island of Karpathos has more than 20 beaches that await you with clear azure waters. Start by taking a tour boat around the island to discover the ones that best meet your needs. The most renowned ones are the sandy Kyra Panagia and the bebbly Achata, with its breathtaking seabed (located 10km from Pigadia). Ammopi beach (6km from Pigadia) offers various facilities and is ideal for sea sport lovers. Apella has emerald coloured waters and a golden sandy beach. Visit the pristine beaches of Agios Nikolaos and Agios Georgios near the settlement of Arkasa. If you are a windsurfing aficionado head towards Diafani from where you can embark on a boat to explore the beauties of the islet of Saria. 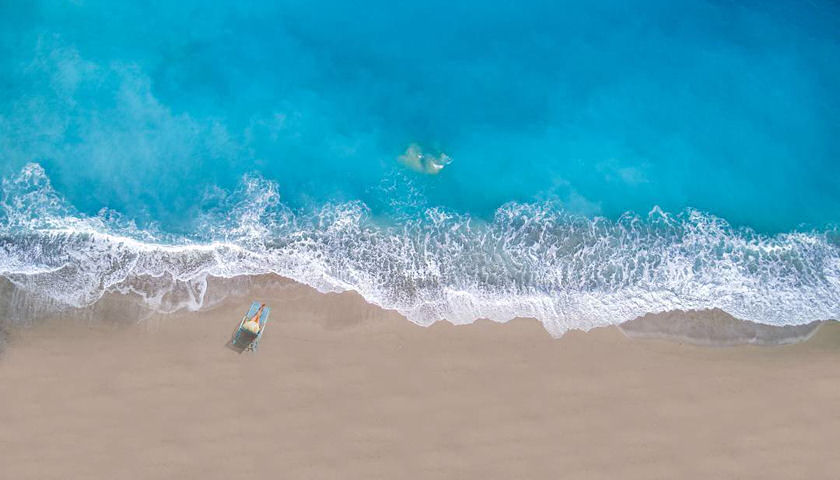 Lefkada is surrounded by a total of 24 islets – Aristotle Onassis’ Skorpios being one of them. It connects to the opposite coast of Central Greece via a floating swing bridge. The bridge offers easy access to Lefkada to visitors from all over Greece. On Lefkada you will find noteworthy sights, churches and monasteries, picturesque villages, lush vegetation, idyllic coves of transparent, turquoise waters, busy and secluded beaches of stunning beauty, a significant cultural heritage and hospitable locals.

There are picturesque alleys, small squares, traditional houses, elaborate belfries and paved pedestrian zones that give this town its character. The city is surrounded by a canal and a lagoon, while, farther north, lies Gyra, a thin stretch of a sandy beach forming a circle, dotted with windmills and scant vegetation.

Don’t miss out on:
– Strolling around the old Venetian Harbour of Chania with the fortress and the lighthouse.
– Visit the market of the city and taste the drooling culinary delights of Crete as well as their strong drink, raki.
– Basking at the golden exotic beaches lacing the Libyan Sea all along the Cretan shore, from Falassarna in the west to Vai in the east, where one feels they are on a tropic island while still being in Europe. Vai is also known for its exotic forest of palm trees.
– Diving in the spectacular underwater cave of the Elephants, owing its name to the bones of elephants found there. It is not far from the port of Chania called Souda.
– Participating in agritourism activities in the Vamos peninsula and Milia traditional village in Chania district.
– Taking pedalo rides at Kournas Lake, the only natural lake of Crete and an important wetland too.
– Enjoying Mount Psiloritis, whose Geopark is part of the UNESCO network. Springs, lakes, gorges and caves wait to be explored.